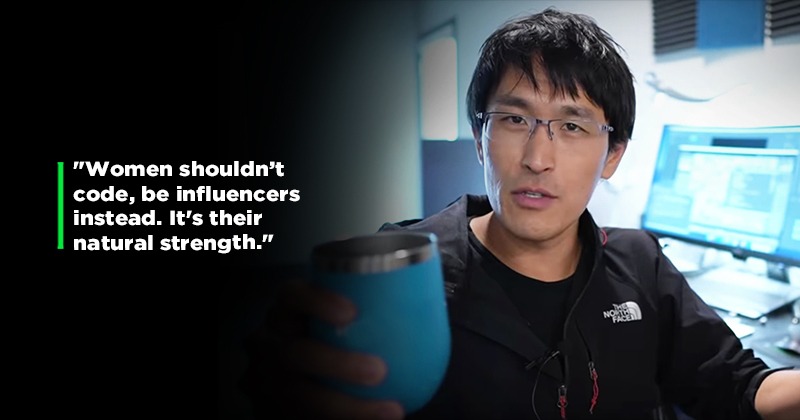 This man’s very sexist commentary on women in coding is exposed, and rightly so

A tech YouTuber who goes by the name “TechLead Patrick Shyu” is called out for tweets targeting female programmers. A former Google and Meta employee, Shyu explained that women shouldn’t code and programming isn’t for them.

In a sexist Twitter thread, he exposed highly reprimanding stances and regressive judgment that are downright dangerous to society.

“They (women) come back obsolete & outdated”

He wrote, “Women shouldn’t be coding…maybe instead be influencers/creators. It’s their natural strength. Coding is brutal 24/7 work, mutually exclusive with motherhood. – after 9 months of maternity leave, they come back obsolete and outdated. Elon Musk even says that the birth rate is dropping too much.”

Women shouldn’t code…maybe influencers/creators instead. It is their natural strength.

Coding is a brutal 24/7 job, mutually exclusive with motherhood – after 9 months of maternity leave, they come back stale and outdated. Elon Musk even says that the birth rate is dropping too much.

“No one wants to see a pregnant woman on the battlefield”

While comparing tech and coding directly to motherhood, he shared his thoughts on how women who choose this career are “dumbs.” He also used the very outdated analogy that “no one wants to see a pregnant woman on the battlefield”, thus reducing a woman’s entire identity and purpose to that single act of childbirth.

It is not discrimination. It’s like female soldiers – no one wants to see a pregnant woman on the battlefield.

Do it if you want and we’ll support your choice, but…men don’t choose between family or career. Only a fool chooses his career.

“A woman should be a good mother and a good wife”

“We asked for influential women and instead got ‘independent women’ in pantsuits. Independence doesn’t exist if you want a family. A woman should prioritize being a good mother and wife, not a coding machine. great job,” Shyu wrote.

No one asked for female programmers. We asked for influential women and instead got “independent women” in pantsuits. Independence doesn’t exist if you want a family.

A woman should prioritize being a good mother and a good wife, not a coding machine. “Mother/Wife” is a great job.

“I cannot recommend coding to any woman”

To top it off, he justified himself and said, “I’m just giving a voice to all the silenced mothers who have been forced out of their jobs. Technology is unfriendly to mothers. We have to recognize it. When we do, we can create change (like part-time remote work). As things stand, I cannot recommend coding to any woman.”

Here is also an explanatory video:

Here is the video explanation: https://t.co/mcSniP7N4b

When it came to these tweets, his argument was met with not only female opposition, but also so many men who were equally enraged by this man’s shameless misogyny:

Imagine men taking care of their own children. Yes, I married a man who cooks and cleans, we actually work as a unit, not as two separate people raising a child. I worked 70 hours a week when I needed to, to earn money for my family, because my husband couldn’t earn that much. Family.

“Nobody wants a pregnant woman on a battlefield” – I don’t agree with anyone, but coding is not a battlefield. It’s a simple 9am to 5pm job where we work, enjoy and network,

I would be exceptionally surprised if a self-respecting person wanted to start a family with you after hearing this take.

Contrary to popular belief, women do not spend their entire lives pregnant.

Also, men absolutely choose between family and career. There’s a good reason why the “absent father” is a common experience. Because men are encouraged to choose their career.

the very first programmer was literally a woman https://t.co/4RxYbRBfTw

Patrick Shyu is a US-based engineer and runs a tech YouTube channel. Previously, he was a software developer, former CTO and software engineer at Google and Facebook, and YouTuber. Reports emerged that Patrick “TechLead” Shyu was fired earlier from his job at Facebook because the company did not approve of his YouTube channel.

For more news and current affairs from around the world, please visit Indetime News.