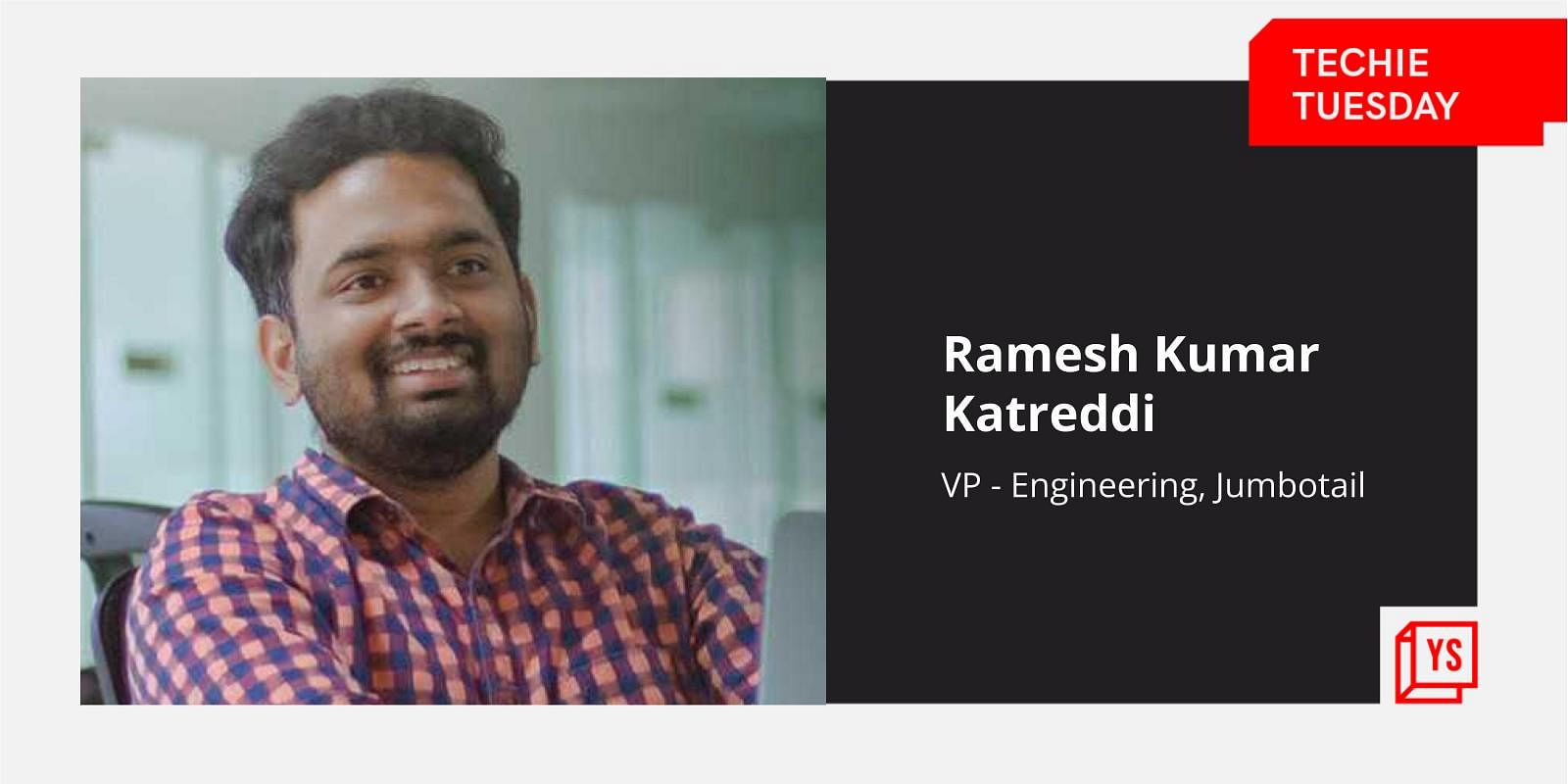 [Techie Tuesday] From coding for Adobe’s Dreamweaver to creating the Jumbotail e-commerce platform, the journey of Ramesh Kumar Katreddi

Ramesh Kumar Katreddi, the vice-president of engineering at B2B marketplace Inasmuch asgiant tailInasmuch as, grew up in an ordinary middle-class family in Hyderabad. Although he spent his formative years studying at a Telugu middle school, that was never a limit for Ramesh, whose love for technology and problem solving transcended language barriers.

“What intrigued me about technology was watching my brother, who was already doing his engineering. His experience introduced me to computer science and software engineering. where Google was making waves,” Ramesh recalls.

Ramesh had started learning HTML and CSS to create small websites, his first attempt at coding.

“That’s where it all started, and I started preparing to join IITs, who came from a Telugu background, because I had to figure everything out from scratch,” says Ramesh.

After school, Ramesh chose to join the National Institute of Technology (NIT) in Warangal in 2007. Still at the top of the school, he remembers being constantly driven by analysis.

He also admits that his family played a strong influence in all of his choices. Seeing his sisters and brothers build new things helped Ramesh make choices. “For me, it was about solving puzzles and that’s what everything was like, so at the age of 20, for me, it was an easy choice,” says Ramesh.

He says once he started coding, there was no going back. After joining NIT, the pressure to code more and create new things had increased dramatically. “We had the best teachers, and every weekend we were building codes and working on different projects. Our assessments were based on the projects we did and how and what we learned during the construction process,” Ramesh recalls.

In the last year, NIT Warangal students were able to participate in very high level coding competitions. This gave Ramesh a better understanding of problem solving and he chose to spend time as a research assistant at the International Institute of Information Technology (IIIT) in Hyderabad. Later, he joined IBM for an internship in 2010.

At IBM, Ramesh was responsible for creating a research project on railway ticket booking, using Hindi interactive voice response. The idea was to make it work with different regional languages.

“It was a great experience – working on an experimental product of creating a speech recognition system to recognize Hindi by lexical analysis. The system was designed to convert Hindi speech into a test, it had a pass rate of 50% At that time, that was a big deal, given the accents and tonal variations,” says Ramesh.

He was at IBM until 2011, and during that stint he managed to build the interactive voice response system which uses text-to-speech. Ramesh also assisted with data storage and ticket reservation transaction management.

Soon after, Ramesh successfully completed an on-campus internship to join Adobe. “It was an interesting day, where I had to make a presentation at the IBM office in Bengaluru that morning and then be back in Hyderabad in the evening to participate in on-campus internships. I was one of only two people to be placed on the same day,” says Ramesh.

He’s confident in college, and internships have helped him push himself better, and working at a big company like Adobe has helped him understand the importance of working with teams and different types of people.

“I mainly worked on Dreamweaver at Adobe. It was simple, and someone who didn’t know HTML or coding could still build a website by simply dragging and dropping key elements,” says Ramesh. He adds that the idea was to focus on how they could contribute.

Ramesh believes that although Dreamweaver is a simple web design and development tool, it gave him a rich experience because its code base was considerably complex. He worked on iterations of the same until 2013, and after that, as a senior technical staff member, Ramesh continued to build new visual features and tools for Dreamweaver and Creative Cloud.

Ramesh then worked as a computer scientist at Adobe, where he built systems to sync user data across systems in real time as part of the creative cloud. It was around 2015 when Android was also gaining momentum and WhatsApp systems were growing.

At Adobe, I was on desktop apps and had no exposure to building mobile apps. To better equip myself with technological advancements, during my working hours outside the office, I explored how Android apps work and how scalable backend systems are built by creating clones of WhatsApp and other apps.

This intrigue, however, was the origin of his new startup in 2015, WhatsDplan, an event aggregation and group planning platform that helped users discover, plan and book activities and events together.

Speaking about his experience leading his first startup, Ramesh says, “We got good recognition and awards, and once there was momentum, I left my job at Adobe to develop the product. with a friend. We built the business and integrated it with Zomato, and the plan was to have all the restaurants, movies, and fun activities in one digital place. However, the startup was unsuccessful due to the challenge of supply and demand. Group purchase bookings were different and required deep discounts. Nonetheless, the whole experience gave me significant exposure and learnings in building a business and how things work,” says Ramesh.

Shortly after closing up shop, he joined Jumbotail in 2017.

“I was very intrigued by the scale of the problem that Jumbotail was solving and building. The scale of the challenge was daunting. When we look at supply chains, we understand that they create and form the backbone of the segment of hyperlocal and B2B e-grocery. At Jumbotail, I build and lead the engineering team. We believe technology has the power to transform the future of retail,” says Ramesh.

At the Bengaluru-based wholesale and food grocery platform, Ramesh has built the entire supply chain system from scratch with smart warehouses, financial and logistics systems, multi-vendor systems tenants and credit and market platforms in place.

And while Ramesh doesn’t code every day at this point, he thinks it’s important to build and keep coding. “It’s always about solving and breaking down the problem to find the best possible solution,” says Ramesh. He believes that while technology keeps evolving every day, it’s about focusing on the fundamentals and choosing the “right tool for the right job”.