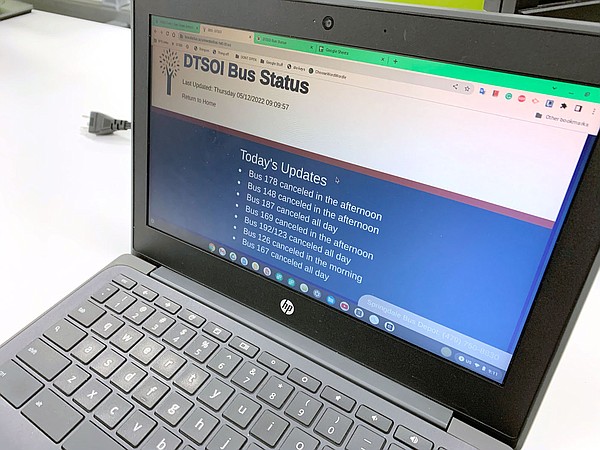 Springdale students use coding to solve the bus dilemma

SPRINGDALE — Two computer science students from the Tyson School of Innovation have created a website to track daily school bus cancellations in the district in real time.

Seventh-grader Joseph Rouse and senior Lucas Keller solved the problem for their district as part of a project for their programming class, taught by Jessica Mabie.

Schools relied on emails and social media posts to communicate last-minute bus cancellations to families. The website makes it easy for students and parents to find their school and see a list of updated bus routes with just one or two clicks.

Rouse was frustrated with the number of emails he was getting regarding bus cancellations, so he decided to tackle the issue with Keller’s advice. In October, the two students began creating a bus update tracking website for the School of Innovation. They finished the project in December.

Vice-Principal Aurelian Sennett shared the site with Transportation Director Kevin Conkin, who was so impressed he asked the students to create a district-wide website.

The design of a district service website took the project to the next level. Springdale is the state’s largest school district, with 31 schools and more than 22,000 students. The district transports between 16,000 and 18,000 students each day on 98 bus routes, Conkin said.

Staffing has been difficult for the transportation department due to the covid-19 pandemic and an extremely low unemployment rate in the region, he said. The department typically hires retirees as bus drivers, but people in that age group are at higher risk of contracting covid-19, according to the federal Centers for Disease Control and Prevention, he said.

It was not unusual to have as many as 10 to 15 district bus drivers absent per day during the height of the pandemic, translating to an average of 10 routes per day without bus transportation, a statement said. school district press releases.

Driver shortages and route cancellations are creating unpredictable transportation for students, forcing families to make last-minute adjustments. Prior to the website’s design, the transportation department texted route updates to principals, who communicated them to students and families via email or social media, Conkin said.

Now, the spreadsheet where transportation staff record cancellations is linked to the website. Thus, when employees make an entry, it is automatically updated online.

Rouse and Keller achieved this by using Python, a high-level general-purpose programming language, to create their program. They used Jinja, a web template engine, to instruct the program to create a new page for each item in the list.

The final website went live a few weeks ago and had a huge impact, Conkin said.

Students are the ones feeling the effects of the driver shortage, he said.

The partnership of students with different levels of computer experience was key to the success of the project, according to the press release.

Mabie is a first grade teacher who recently made the transition from a career in technology to education. She hoped that older students would be able to give younger students more time while more experienced students tested their knowledge by sharing it with someone else, she said.

Rouse, who started coding in sixth grade, said he had learned a lot online over the years, but it was more useful to learn directly from Keller, who taught him how to extract data from websites. and spreadsheets.

Keller said he thought the project improved his teamwork and management skills.

Keller recently had another coding success. He was captain of the coding team, led by Mabie, that won second place in the sixth annual Governor’s All-State Coding Contest on April 30. He was also selected as a finalist for the National Merit Scholarship earlier this year.

Keller plans to attend the University of Michigan to study computer science next year. Rouse also plans to continue coding.

Joseph and Keller’s relationship is already creating a ripple effect as Joseph passes on what he’s learned to other students in the class, Mabie said.

Joseph Rouse (left to right), Lucas Keller and teacher Jessica Mabie speak Thursday, May 12, 2022 in a computer lab at the Don Tyson School of Innovation in Springdale. Rouse and Keller worked together to create a website that provides real-time updates and monitoring of bus schedule changes and available buses throughout the district. Visit nwaonline.com/220515Daily/ for today’s photo gallery. (NWA Democrat-Gazette/Andy Shupe)

Teacher Jessica Mabie (center) speaks Thursday, May 12, 2022, alongside students Joseph Rouse (left) and Lucas Keller in a computer lab at the Don Tyson School of Innovation in Springdale. Rouse and Keller worked together to create a website that provides real-time updates and monitoring of bus schedule changes and available buses throughout the district. Visit nwaonline.com/220515Daily/ for today’s photo gallery. (NWA Democrat-Gazette/Andy Shupe)

Check out the site that students Joseph Rouse and Lucas Keller created to track bus cancellations at sdale.org/page/busstatus.