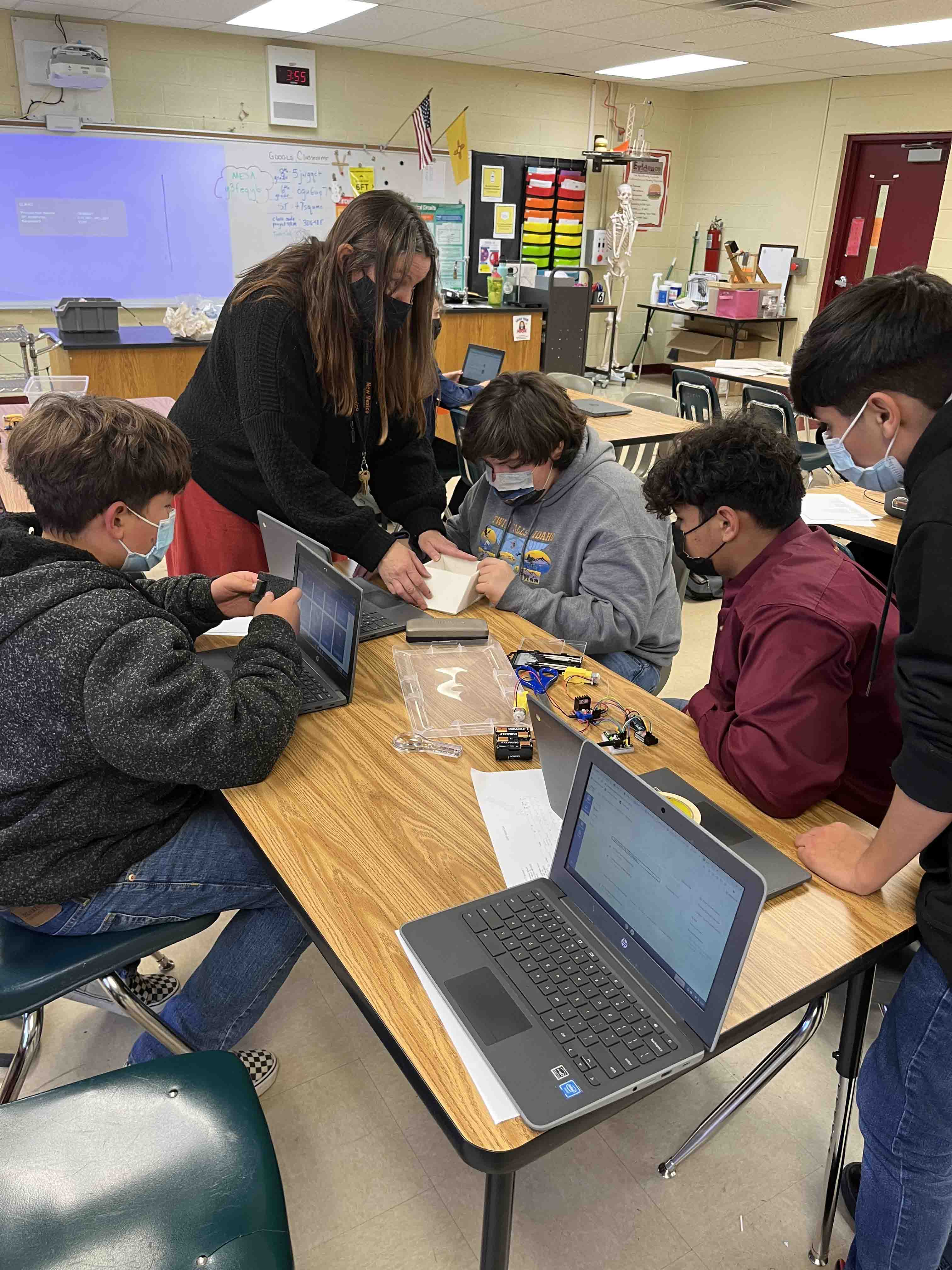 While CC Snell Middle School has faced great challenges over the past few years – not only because of the pandemic, but also due to understaffing and a lack of funding and resources – a group of ‘ students, led by their indomitable teacher, found refuge in science.
Drea Cornwell, the school’s science teacher and advisor in Mathematics and Engineering Science – or MESA – followed in the footsteps of her mentor, former Snell science teacher Cindy Lee, creating a plethora of hands-on experiments for His students. These students include both those in its regular classes and the 73 children – out of only 240 schoolwide – who participate in the after-school MESA club.
MESA, a nationwide program focused on science and engineering, offers students the opportunity to take field trips, compete in statewide competitions, and attend workshops hosted by organizations like Intel and NASA. Cobre students can participate in MESA at both Snell and Cobre High School – with the opportunity to earn up to $1,000 towards their college education by participating in the club.
With MESA, “we have community partnerships that we’ve built over time,” Cornwell said. “My mentor teacher, Ms. Lee, who was a science teacher at Snell for 28 years, she really built that science department culture by actively doing things with the community.”
Freeport-McMoRan, the U.S. Forest Service, Silver City Watershed Keepers and Stream Dynamics are among several area businesses and organizations that have partnered with the department in recent years, Cornwell said.
“Students don’t just learn science, they watch real people in their community who use science and who have built STEM careers,” Cornwell said. “I think it’s important for students to see that there are things you can do with science in their own community.”
While community partnerships and private donations help the department, Cornwell, with support from Snell Principal Patrick Abalos and Cobre Acting Superintendent Joyce Barela, has also led grant-writing efforts. The department now uses funds granted by the Asombro Institute for Science Education, Amazon Future Engineers, New Mexico PED, New Mexico MESA in conjunction with New Mexico Tech, and New Mexico MESA in conjunction with Intel.
“We’re a Title I school, so we don’t have funding. If you want to have supplies, it’s really about partnering with the community, building those relationships, writing, and getting those grants,” Cornwell said. “We had a few science books in our curriculum, but it was difficult to teach them, because we don’t have the budget to buy the lab equipment – ​​and before COVID, we didn’t even have computers.”
Rather than simply working from this manual, the department has instead chosen to use a discovery learning model, which allows for more flexibility in creating meaningful learning experiences for students. Students work with coding programs, create their own animations, use portable data loggers for accurate and in-depth data collection, and learn through hands-on curriculum, in addition to building and coding their own robots, among other things.
Seventh-grade student Clair Biebelle took a short break after working on her DIY Otto dancing robot to pollinate plants by hand, using a paintbrush to move pollen from stamen to stamen during science technology class of Cornwell last Thursday. The classroom’s indoor grow station was filled with tomato, pepper and lettuce plants, all of which were thriving. Biebelle said the class planted each one from seed and the students worked to tend the small garden.
Just outside the classroom is a greenhouse that the students also use, and before the pandemic, Cornwell noted the department also had a small flock of chickens.
Elias Guadiana, an eighth-grader and president of the MESA club, said his experiences with the organization over the past three years have given him the opportunity to not only grow as a leader, but to expand his understanding of coding and building projects.
He and his fellow club members are currently working on a specific coding and building project.
“Combat robots are meant to fight,” Guadiana said. “We have a specific code to operate the robot from a small remote control. We have just completed reverse coding.
After working for months on their robots, not only coding the mini battle machines, but also designing and crafting armor, and practicing combat techniques and mid-battle repair skills, the members from the MESA club will then compete in a statewide competition at New Mexico Tech.
Seventh graders Adrian Carbajal and Emilioh Rivera, who also play on several school sports teams, chose to take Cornwell’s Science Technology course as an elective, and both are freshman members of the MESA club.
“The class challenges we do are really fun,” Carbajal said. “We had to build a tower out of toothpicks and make a race car.”
“We had to make our race car out of balloons, a straw and rubber bands,” Rivera added.
“We have to follow certain guidelines, like engineers would,” Carbajal continued. “It’s quite fun.”
The boys worked together on a toothpick tower and were proud that their tower won, judged by both its height and sturdiness.
Along with the class challenges and animations they each created, Carbajal and Rivera echoed Guadiana when it came to their favorite class activity: coding battle robots.
“You have to be very precise when working with these,” Carbajal said. “It helps keep the brain working.”
Not only does Cornwell encourage this attention to detail, but she also creates an intentional space for her students to fully engage in the learning process.
“I’ve really seen a lot of growth in my students,” she said. “A lot of these kids had never coded before, and they’re already animating and talking the lingo. I’m so proud of the work they do!
Hannah Dumas can be contacted at [email protected] press.com.

From digital marketing to coding, list of internships to apply for this month

Sponsored: Developers have defined “secure coding” and their answers…

Springdale students use coding to solve the bus dilemma