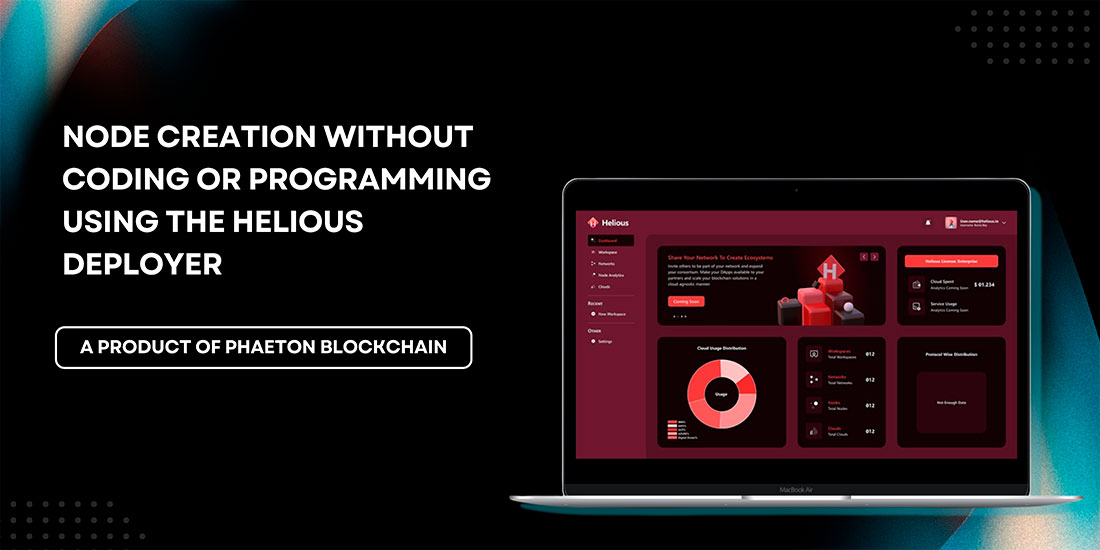 Node creation without coding or programming using the Helious deployer

As part of the value proposition of Phaeton Blockchain opportunities for developers, Phaeton has launched the Helious deployer for node development. The Helious Deployer, an enterprise-grade Phaeton framework, is an automation platform that helps developers deploy nodes easier and faster by supporting users’ DevOps workloads and allowing developers to focus on more important aspects. Offering the ability to own nodes and stake PHAE to earn rewards without writing a single line of code, the Helious Deployer is the level playing field for non-technical people in the blockchain industry.

The Helious Deployer platform has automated features that deploy and manage Phaeton nodes, including the ability to stake and manage staking for the node owner. Built with other features that include providing analytics and monitoring for Phaeton nodes deployed through the platform, the Helious deployer also sends alerts and notifications to node owners based on activities on the nodes. This feature helps the node to self-repair through advanced analytics and node monitoring. As a node developer, it will be useful to monitor the activities happening on your nodes. However, it can become cumbersome to check these activities manually, especially for developers with multiple nodes. With the Helious deployer, these tasks are automated. This allows the developer to deploy nodes seamlessly and focus on other integral tasks that promote rapid blockchain development.

The Helious Deployer is a breakthrough innovation from the Phaeton team as it allows developers to deploy nodes faster and seamlessly in a very short time while providing enterprise grade security to nodes. As a seamless automated deployment platform, Helious deployers enable developers to deploy blockchain nodes and networks seamlessly, helping developers save time to market and costs. In a fast-paced and ever-changing world of cryptocurrency, it can become quite stressful for developers to keep developing and deploying nodes manually, spending valuable time that could have been spent on new features and enhancements. advances in the task of developing and deploying nodes. With the Helious deployer, Phaeton network developers can be saved from these evils.

As Phaeton’s proprietary software, Helious Deployers have the ability to provide developers with on-demand scaling and resource optimization for deploying Phaeton nodes. The Helious deployer manages CI/CD pipelines that work effortlessly with GIT integration and other tools. The developer can access advanced blockchain analytics for various protocols on the user dashboard, allowing the developer to make informed and better decisions. Monitoring activities also extend to cloud resources.

A complete solution for developing nodes on the network, the Helious deployer comes with multi-cloud support that allows Phaeton nodes to be hosted on the cloud infrastructure of the developer’s choice. Additionally, the Helious deployer comes with a host library that provides developers with relevant and helpful resources and support. Phaeton has always had people at the heart of the development of its applications and solutions. Similarly, the Helious deployer was developed to give users flexibility and control over their choices. As a node developer on the Phaeton Blockchain network, it is quite easy and safe to connect to any cloud infrastructure of the user’s choice while automating node development and deployment.

The Helious Deployer takes the arduous task of manual configuration away from the individual. It also helps the user to keep data relevant on their nodes at all times. The Helious deployer will take responsibility for handling any hardware and synchronization issues, allowing interoperability of multiple nodes. Thanks to the self-diagnosis function, the Helious deployer can identify, analyze and solve possible problems that may arise during the operation of the node.

The Helious Deployer also helps node owners manage the management of the staking process. The Helious Deployer monitors the minimum balance available for staking, initiating the staking process with the amount of PHAE determined by the owner. Through data analysis and insight, the helious deployer can increase the node’s chances of being chosen for block creation, ensuring that the node owner is consistently rewarded for staking PHAE on their nodes. The Helious deployer can also protect the owner’s stake interests as it does not allow double signing or launching an attack on the network, which are actions that can lead to loss of stakes.

As with its other products, Phaeton, on the Phaeton blockchain, continues to deploy people-centric and eco-friendly solutions. As with other blockchain products, the Helious deployer will positively contribute to the growth of the Phaeton blockchain network and the associated PHAE token. The prospects offered by these solutions and applications continue to excite investors, encouraging them to hold more PHAE coins and, at the same time, stake them to earn passive income.