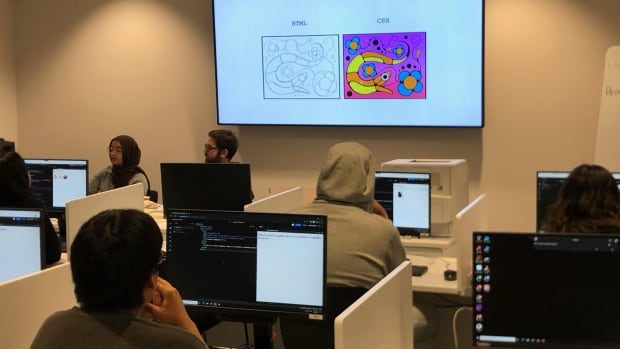 The INDIGital program is a four-week course created by the Indigenous Friends Association, a non-profit organization. The goals of the program are to teach digital literacy to Indigenous youth while connecting technologies with Indigenous knowledge.

“This is an empowerment course,” said Danielle Paradis, program manager at INDIGital.

Previously offered in Saskatchewan and Ontario, the program held its first session at the Edmonton Public Library, beginning May 9 and ending in early June.

INDIGital offers students the opportunity to learn coding, create their own websites, and design digital content, while learning about Indigenous history and teachings.

Paradis said the program helps young people understand how technologies have existed in the worldview of Indigenous communities.

6:29The INDIGital program combines traditional indigenous knowledge and the logic of coding

A course that combines technology and traditional Indigenous teachings has arrived in Edmonton. Edmonton AM’s Liam Harrap dropped by one of INDIGital’s courses at the Stanley A. Milner Library to check it out.

“Often, Indigenous peoples are portrayed as people who existed in the past, not as real, present people,” Paradis said.

“A big part of this program is about understanding that Indigenous peoples have always had the technology.”

She said they are also exploring gaps in the current tech landscape as it relates to Indigenous peoples.

Privacy activists and guardians talked about how facial recognition software and other AIs disproportionately target Black and Indigenous communities.

Paradis said it’s important for people in these communities to learn to participate and create, to make the technologies work for them.

Serenity Jacko, a student in the program, learned about it via Facebook.

She loved the idea of ​​learning to code — not just so the technologies she was already using would make more sense, but to have an extra skill that would come in handy on a resume.

Previously, she says, she felt “completely lost” when someone brought up the coding language.

“I don’t want to feel like this,” she said. “It would be nice to have at least an idea.”

Jacko and other students learned programming languages, how to design a website, and were introduced to beading. They also learned how to move robots in a fixed pattern using code.

Paradis said the workshop was created in part to help improve Indigenous peoples’ relationship with technology.

“A lot of times, Indigenous people, if they grow up in, say, rural or remote areas, often learn that technology is not a good thing,” she said.

Even though technology plays a huge role in these communities — “Facebook groups are huge on reservations…and that’s where, especially during COVID, everyone was gathering and getting information” — she said a lot of communities grasped the technology.

Programs like INDIGital are important, she said, because they can teach how technology can benefit these communities and also how to use it safely and effectively.

The INDIGital workshop has taken place in other parts of Canada. The Edmonton program was a first. Paradis said the hope is to hold another workshop in the city next year.

“We want to be a multi-year presence in Edmonton. I think we have a very vibrant Indigenous community,” she said.

Those interested in attending the workshops can do so on the Native Friends Association website. Paradis said there is a waiting list, but once the workshops take place, they will reach out to individuals to see what works.