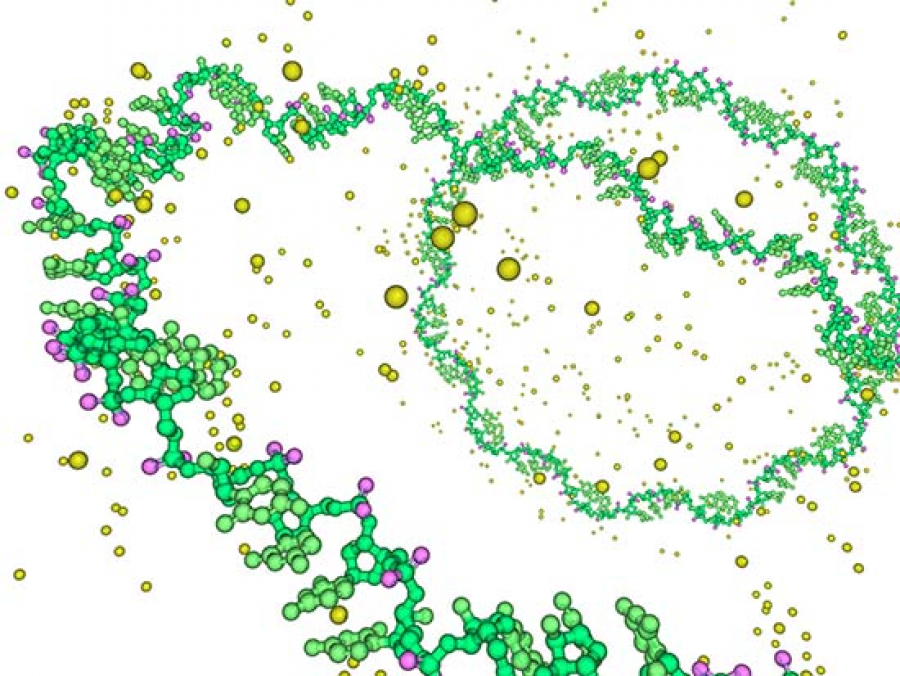 Anindya Dutta, MD, Ph.D.,
Photography: Andrea MabryIn one paper in Cell Reports, Anindya Dutta, MD, Ph.D., and colleagues detail the first structure-function study of a long noncoding RNA, or lncRNA, called MUNC lncRNA. Their findings underscore the importance of experimentally determining the structure of an lncRNA by a chemical method — rather than computer modeling — to identify structural domains that turn out to have multiple different functions.

An lncRNA is an RNA longer than 200 bases that is not translated into a functional protein. Humans appear to possess several tens of thousands of these RNAs which appear to play a key role in gene regulation through interactions with DNA, RNA or proteins. However, few have been functionally characterized, and even fewer have experimentally determined information about their structure.

The researchers studied MUNC ncRNA in mouse myoblasts, precursor cells capable of differentiating into skeletal muscle cells. MUNC lncRNA is known to play an important role in the formation of this skeletal muscle tissue through differentiation, a process called myogenesis. The MUNC lncRNA has two isoforms, one with 1083 nucleotides which has two exons and one intron, and one with 518 nucleotides, where the intron has been cut out and the two exons spliced ​​together.

Knowing how lncRNAs work in differentiation is potentially important for understanding and controlling cancer, Dutta says, because cancer cells are dedifferentiated cells. Understanding how they get there and learning how to reverse it could lead to new therapeutic approaches. Dutta became chair of the genetics department at the University of Alabama at Birmingham in March 2021, moving from the University of Virginia School of Medicine.

In the current MUNC lncRNA study, the researchers found two important results when they made chemical structural determinations of the two isoforms. First, these structures had several structural domains that were not detected by computational predictions. This shows the need to experimentally determine the structures. Second, these domains were largely conserved between the two isoforms, indicating domain stability. The domains included six common “hairpins”, where RNA folds back on itself to form a double strand, present in every isoform. The spliced ​​isoform had an extra hairpin and loop not seen in the unspliced ​​isoform.

Dutta and his colleagues then set out to probe the functional importance of these domains.

Both isoforms, when overexpressed in mouse myoblastic cells, were promyogenic, meaning they promoted the expression of genes involved in muscle cell differentiation, likely through activation of a common set of transcription factors. However, while 645 genes were upregulated by both forms of MUNC, another 2,730 genes were upregulated by only one isoform or the other. Thus, they control different sets of genes.

The researchers created variants of the spliced ​​isoform that either lacked a specific structural domain or had a defined mutation in only one domain. Each variant was overexpressed in mouse myoblastic cells to see how disruption of individual structural domains affected the expression of promyogenic factors. The resulting changes in gene expression revealed that different RNA domains of MUNC were important for the binding and regulation of different genes. Thus, they could act independently, suggesting that the spliced ​​MUNC is something like a Swiss army knife that contains different tools in a pocket knife.

The independence of two of these domains and the overall stability of MUNC have been demonstrated in another way. Chemical structure analysis was repeated for two of the variants – one with a common hairpin-1 deletion and the other with a common hairpin-4 deletion. These two hairpins were reviewed because both are essential for promyogenic phenotypes. The results revealed that both deletions were surgical, meaning that the rest of the remaining RNA secondary structure was unchanged.

The researchers also tested how losing or mutating the domains affected MUNC binding to two different promoter sites on the chromosome for the Myod1 gene, which encodes a protein that acts as a master switch for myogenesis. Such binding at either site leads to increased expression of the Myod1 gene. Experiments showed that three of the hairpins were required for binding at both sites. Additionally, six other domains were important for binding, but with one difference – three influenced binding at one site and the other three influenced binding at the other site. Thus, different domains mediate distinct features of MUNC promyogenic activity.

To add to this complex story, Dutta and colleagues tested whether the structure or sequence of RNA bases was responsible for the functional roles of common-hairpin-1 and common-hairpin-4 in promyogenic gene expression. They did this by creating mutants of the two hairpins, where different RNA base sequences were changed without altering the hairpin structure. The result? The mutants retained their function in inducing Myod1, indicating that shape, not RNA sequence, was key. “Based on the results of eight independent sequence mutants, we conclude that the MUNC function attributed to common-hairpin-1 and common-hairpin-4 is primarily structure-determined,” Dutta said.

“Overall,” said Dutta, “the multimodal mechanisms of gene expression regulation by MUNC involve different domains of MUNC, and likely different protein partners. MUNC recruits variable cooperative mechanisms depending on the genomic context, and this behavior is likely exemplary of other lncRNAs that regulate gene expression.

UAB’s Department of Genetics is part of the Marnix E. Heersink School of Medicine. Dutta is a principal investigator at UAB’s O’Neal Comprehensive Cancer Center.

The coding course market for kids is set to explode