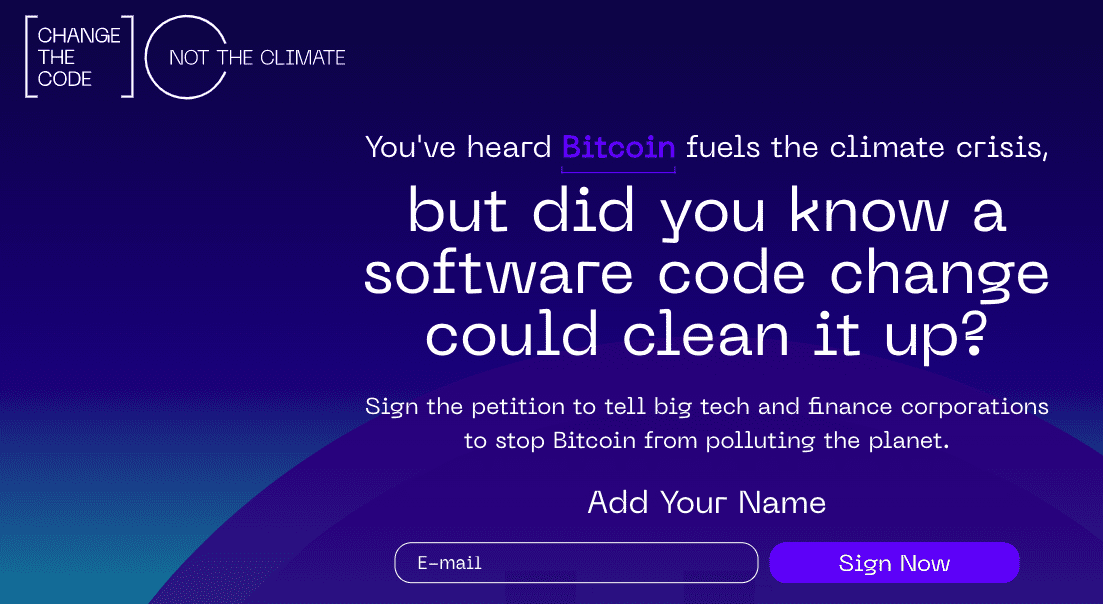 Bitcoin has a greenhouse gas problem. A coding tweak could fix most issues

A coalition of environmental organizations and crypto-billionaire Chris Larsen have launched a campaign to change bitcoin’s code to reduce its high power consumption. The effort found that switching from one software code (proof of work) to another (proof of stake) could reduce climate emissions by 99.9%.

Bitcoin has become very popular among investors, but its energy consumption has become an issue. Bitcoin produces about as much CO2 as countries like Croatia or Kenya, which has alarmed environmental organizations and lawmakers, pitting the cryptocurrency against efforts to tackle the climate crisis. Now, this new campaign seeks to find ways to make bitcoin better for the environment, while maintaining its mainstream appeal.

“We know the crypto community is extremely driven by a sense of progress, fairness, and good intentions. Many advocates are speaking out about the fight against climate change. The dream of so many early crypto innovators is within reach, but only if the industry takes crypto that runs on low power seriously,” the campaigners write.

Last year, the cryptocurrency world announced its own version of the Paris Agreement. The Crypto Climate Accord describes itself as a “private sector-led initiative for the entire crypto community,” working to decarbonize the sector. Its goal is to shift the crypto industry to only renewable energy sources by 2025.

But why does the crypto industry need a climate deal? Because it has a very large and growing carbon footprint. A 2019 study, for example, estimated that Bitcoin’s energy consumption emitted 22 million metric tons of CO2 in the previous year. For context, this represents around 10% of annual emissions from the global rail sector.

Crypto’s energy problem mainly stems from the coin mining method, known as “proof of work”. To get coins, miners use CPUs to solve puzzles to ensure safety and authenticity. Their systems have to find the key to a particular block (a code by an algorithm) and match their guess to the block until they find the correct line of code. This step is very processing intensive – and therefore very energy intensive.

To make matters worse, most crypto mining operations take place in countries with low energy prices and an energy matrix that is largely based on fossil fuels (especially coal). This was mainly the case in China, which accounted for around two-thirds of global mining. But that is no longer the case, as the government has largely banned the activity and pushed companies to other countries, such as the United States.

The problem should not be underestimated. Bitcoin consumes around 120 terawatt hours (TWh) of energy in a year, which is equivalent to the energy consumption of the Netherlands, according to estimates from the Bitcoin Electricity Consumption Index (CBECI) of the University of Cambridge. We keep mentioning countries because bitcoin actually emits more emissions than most countries on the planet. As a country, bitcoin would rank 32nd in the world in terms of energy consumption – a problem worth solving.

The new campaign, titled Change the Code Not the Climate, is coordinated by Greenpeace USA, the Environmental Task Force, and several other grassroots organizations that are challenging bitcoin mining facilities in their communities. They are calling on bitcoin to change the way mining is done to combat its large carbon footprint.

One of their biggest tools at their fingertips is using alternative mining programs. In 2021, the developers introduced a new approach called “in-game evidence”. It’s less energy-intensive than proof-of-work because not all miners need to be online to verify transactions. Instead, some participants are randomly selected as validators.

Bitcoin’s main rival, Ethereum, is currently working on a major software overhaul to move from proof-of-work to proof-in-game, which is expected to reduce its power consumption by 99%. That could leave bitcoin feeling like an alien, campaigners point out, who are now targeting companies and key stakeholders involved in the bitcoin world.

Yet those drawn to crypto for its security don’t seem to care much about proof-of-stake. Users have questioned that it’s easier for a bad actor to dominate a proof-of-stake space. rather than a proof-of-work space. Additionally, it can be easier for validators to earn more coins than other users, and the technical skills for such roles have a barrier to entry.

At this point, it’s hard to say there’s an immediate solution to crypto’s power consumption. The Crypto Climate Accord suggests increasing the use of renewable energy, but that’s not an option right now. There is not enough renewable energy to meet climate goals, even without considering crypto, so it is essential that crypto becomes as green as possible. Running crypto on renewables will still take a long time, but it would be a step in the right direction.